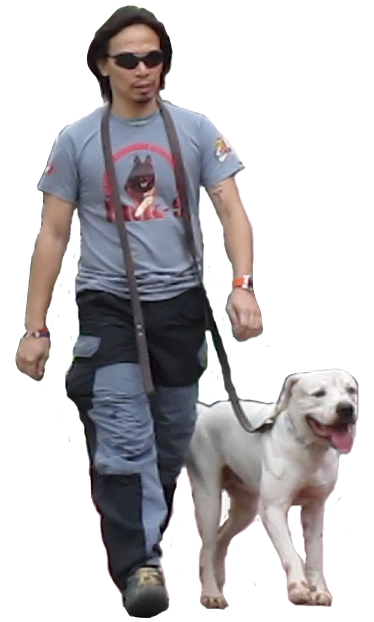 TEAMKOVU.COM is the online brand presence of TEAM KOVU whose legal name is TEAMKOVU ENTERPRISES, which was legally established back in March 8, 2012. Though, it is one interesting fact to know that the concept before the legal formation of Team Kovu already started a year earlier back in February 2011. That's when Carl Michael G. de Leon and his personally trained American Bulldog named Kovu, passed the qualifying trial to compete in the official Philippine Mondioring Trials. What's so important in this milestone is that the Mondioring protection dog sport is a dog sport dominated by the Belgian Malinois and German Shepherd dog breeds. Having a breed such as the American Bulldog to even just get qualified to compete on the said prestigious international dog sport is already an achievement on its own. Although, years even before this milestone achievement by the duo, the “Carl and Kovu” tandem was already active and starting to make a name of their own in the local dog community since 2007. The tandem usually participates in key dog events in and around the metro and in the provinces. Team Kovu is NOW not only known to be competitors in the different dog sport events in the country, but also by doing adventure activities like mountain climbing, river trekking, and exploring the different beach getaways that are dog-friendly.

Over a year of legally existing as TeamKovu Enterprises and backed by years of professional dog training experience since 2007, Team Kovu finally opened its doors to the local dog community by sharing their experiences and training programs through some dog training classes made possible by the team's partnership with SM's Pet Express back in 2013. Invitation to do seminars on how to properly communicate, provide guidance, care, and on how to start training the dogs also came along the way. As the team's reputation grow, so does the media attention locking down on the team's direction through newspaper and magazine articles and by guesting in several local television shows either to feature the duo or as a resource person on topics that are dog related.

Most importantly, TeamKovu Enterprises was legally established to give face to Team Kovu's campaign of "promoting an active human and dog lifestyle" by giving dog owners a whole new perspective in living with dogs and providing new exciting avenues on which they can spend more quality time together. This advocacy was fuelled by the team's passion and feeling of self-fulfillment and accomplishment every time a human and dog tandem have achieved something together. There is no feat too small when done and earned through the bonding each human and dog tandem have nurtured along the way. Team Kovu is here to serve as an inspiration and as a motivation to always take the human and dog relationship to new heights and beyond the boundaries of their homes!