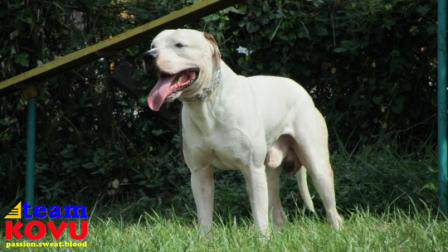 Kovu was born February 06, 2007 and he's a pure Performance American Bulldog. A Performance type American Bulldog (AmBull or AB for short) looks like a large, coarse, white American Pit Bull Terrier (commonly called as the Pitbull). The reason also for Kovu to be more often than not to be mistaken for a Pitbull. To date, as sad as it may still seem, the American Bulldog breed has yet to gain their rightful recognition with the general public. Performance type ABs are usually lighter in weight than their counterpart Bully (also commonly called as the Johnson or Classic) type ABs and have a very muscular athletic look with their front legs under their body and not thrown out to the sides. This makes them very agile and structurally sound. Aside from that, this type has a closer underbite and longer muzzle than the Bully type and will usually weigh between 27 to 45 kgs. These are the characteristics that makes the Performance type ABs more suitable for dog sport activities such as the Mondioring protection dog sport.

Usually, as they were originally bred for, this dominant breed have a very strong prey drive and most likely to be dog aggressive. The reason being is that for about many, many years ago, they were bred to perform their role as protector of the farm from Wolves and Coyotes and do catch work. However, in this modern times and more often than not, one need not such trait from them anymore, especially if you're not living in a farm. So proper socialization and obedience training needs to be established in its puppy formative years in order to enjoy their company when they mature. Given that such homework was done effectively, an AB can prove to be a very good companion and family dog even. Such as with Kovu's case, he has a very stable temperament and is very tolerable of kids and even dogs smaller than him. He's a very social and charming AB that having him as a companion in mountain climbing, river trekking, beach getaway, and other dog events are perfect.

Well-known Performance AB bloodlines are the Scott, Hines, Kerschner, Koura, Stover, and Williamson among others and Kovu is a descendant from a couple of the said bloodlines. The most notable of which is the Koura line of ABs including Fujimo Bandit, Lord Waldo, Bama Boy, and Ultimate Knightmare.

Kovu started his socialization and obedience training since he's three (3) months of age and that's the moment he moved in with his owner/handler Carl Michael G. de Leon and that's May of 2007 to be exact. Carl was the one responsible in laying down all of Kovu's training foundation with the help and advice of seasoned dog trainers, of course. They then started their Mondioring training when Kovu's six (6) months old at the Cavite Mondio Ring Club for the first three (3) years and that's from August 2007 to August 2010. From then on, September 2010 to November 2013, the tandem trained at the Eugene Reyes K-9 Training Club to further advance their Mondioring training experience. The tandem peaked their training schedules for almost six (6) days a week, wherein three (3) of those days were allotted for their Mondioring trainings and the other three (3) for Kovu's conditioning trainings. In between and if their schedule permits, the tandem's taking some time off of their rigorous training schedules by doing some mountain climbing or river trekking adventures, beach getaways, and attending or participating in other dog events. Aside from being trained for the Mondioring protection dog sports, Kovu was also trained to do some basic Disc Dog, Weight Pulling, Agility, and Dock Diving activities, but the trainings that Kovu did for the said dog sports were just to break the ice from his regular Mondioring trainings. When Kovu's retirement in Mondioring came in November 2013, he still continued to do some activities that are more suited for his age and just to keep his already conditioned body moving and satisfied! Besides, having something to do is what makes Kovu happy and energized as he really is an active part of the family! 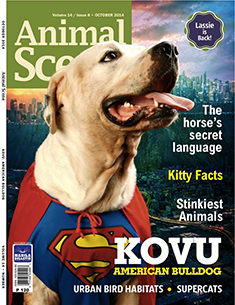 With all of the activities that Carl and Kovu are doing since 2007, they were able to build a name for themselves in the local dog community and have managed to get the attention of the media towards their direction. The tandem got invited to do some guesting in several television shows like GMA 7's Unang Hirit morning show where they were featured twice already to demonstrate some Mondioring routines, as well as, do some Disc Dog demonstrations (more commonly known as Frisbee). While for GMA 7's Pinoy Records show, DJ Sam YG of the Magic 89.9 radio station, challenged Kovu in a Frisbee Showdown. The tandem also got featured in GMA 7's Kapuso Mo Jessica Soho show, wherein it featured one of the tandem's outdoor adventures together with the rest of the tandem's mountain hiking dog buddies. GMANewsTV's documentary show, Reel Time, also featured and documented the tandem's activities from the early morning to night time. They also got to guest in QTV 11's Tropang Potchi kids show to promote the "TailRunners: The Metro Dog Run 2010" event where the tandem was one of the chosen ambassadors of the event. Kovu also got the chance to do his acting debut for an independent film titled "Agawan Base", where he played a very significant role. The last guesting that the tandem made was with ABS-CBN's Matanglawin educational show hosted by none other than Philippine TV's Trivia King, Kuya Kim Atienza. Aside from having some television exposures, the tandem also had their fair share of print media exposures as they were also featured in some newspaper articles. While Kovu also made it to the pages of Manila Bulletin's Animal Scene magazine. Carl was an occasional article contributor to the said magazine back then and would submit articles of adventures and/or activities that he and Kovu would like to share with the magazine's avid readers. To top it all off and in perfect timing of finally achieving Kovu's much awaited Mondioring Level 1 title and eventual retirement from the dog sport, Kovu finally made it on the magazine's cover to be the featured story for its October 2014 issue!

Through all those years of Mondioring training since 2007, it was only on the Summer of 2010, month of March, that Kovu started participating in local Mondioring Fun Match trials outside of the Cavite Mondio Ring Club to gauge how prepared Kovu is for the official Mondioring Level 1 Trials. Training and conditioning Kovu continues, especially after evaluating Kovu's weak points after each of the fun match trials he participated on. To further prepare the tandem, they even participated on the Official Philippine Mondioring Trials in December 2010 with Kovu as the Dog-in-White for the Mondioring Level 1 Trials. Come February 2011, Kovu took his Mondioring Brevet Trial and passed it. The tandem scored 87 out of 100, wherein 80 is the passing mark. Passing a Mondioring Brevet Trial means that Kovu can now officially participate in Official Philippine Mondioring Trials, wherein international Mondioring judges from Europe are usually officiating the trials being held in the country.

Together with that most awaited trial in Kovu's Mondioring career, comes Carl's decision to officially retire Kovu in Mondioring due to the reason that Kovu is no longer getting any younger! Carl wanted to lessen the stress level in Kovu's daily activities, which would be more suited to Kovu's age.